koji.earth is a unique project, in the sense of being the first token to develop and release a professional illustrated comic series exclusively as NFTs to its holders. 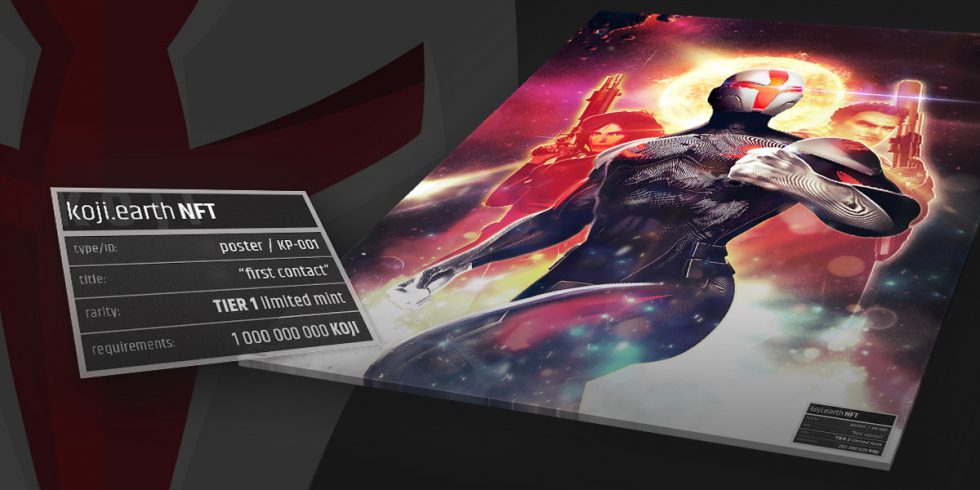 “Koji”, an alien from planet Antilea, is an original story line, depicting the Koji character who crashes on earth and finds himself in the midst of an unseen battle and ending up a hero. We are proud to partner with AmCo Studios a world renowned illustration agency in London which will ensure our NFTs are way ahead and above anything usually seen and offered in the crypto space.

The comic will drop across a number of months which will complete Edition 1. KOJI holders above the thresholds will be eligible to receive this NFT for free. These NFTs will hold value, in addition to their KOJI value, and will give both investors and comic fans alike the opportunity to get rewarded for holding.

Each NFT will be minted in limited quantities equal to the amount of holder eligible at the time of each drop, meaning; no more NFTs will ever exist, therefore if someone acquires later pages or editions, the only way to obtain the previous missing pages or editions is to purchase them from an existing owner, provided they are up for sale!

Please note the method and requirements below are preliminary and not final and that the release date for the full comic is not set yet but we’re aiming for a early 2023 release with the chance of it being a bit earlier, or later, then that.

Coming 2022, the first ever complete NFT comics series! Illustrated by the world-renowned AmCo Studios in London.

How does it work & how do I get them?STAKE KOJI & GET THE NFTs FOR FREE – “Staking with a difference”

koji.earth is introducing a staking mechanism with a difference. Stake and be eligible for NFTs as a reward! Toghether the NFTs will be a comic book series, where each NFT being 1 page from the comic. Collect until the end of Edition 1 and you’ll have the full edition 1 as a NFT. The Koji Comic is a continuous story and Edition 1 is just the start!

Each NFT will be available in two versions: tier 1 will be animated while tier 2 will be a none animated version, both tiers will be of the same page/comic/panels. To be eligible for any of the tiered NFTs you need to stake a certain amount of KOJI as per below:

The NFTs will be limited! As each one will only be mintable during a limited time period and only by the wallets that are staking each tiers amount during that period. Meaning once each NFTs drop window is closed no more of that NFT can ever exist.

Staking will be done through the koji.earth website and will be as simple as connecting your wallet and sending a transaction and the staked amount (A) will remain locked in the staking contract until unstaked.

Staking or un-staking your KOJI will be exempt of the 3% transaction tax but unstaking will incur an unstaking fee (in KOJI, fee % to be confirmed) (B). This fee will be redistributed proportionally to those who are still in the staking pool of the time of unstaking (C).

In addition, whilst in the staking pool, the staked amount of KOJI will continue to earn from the 1% redistribution as usual (D).

Each wallet can only stake either the tier 1 or tier 2 amount so if you are in the tier 1 you can’t mint the tier 2 NFT, only tier 1. Althought if you staked into tier 2, you can “upgrade” into tier 1 at any time by staking the additional amount, but you will only be eligible for the tier 1 NFTs from the time you staked and not previous NFT issues.

You can stake or unstake at any time, but eligibility for the NFTs will only apply from that period onwards so you can’t start staking in week 3 and then receive the NFT released in weeks 1 or 2.

Each NFT will drop during a limited time period, our intention is to have weekly drops but this might change depending on circumstance. Drops will follow the order of the comic (page 1,2,3, etc). When a drop window is opened NFT eligibility will be determined if a wallet had entered the staking contract prior to the end of that drop window.

Minting the NFT will also be done through the koji.earth website. You can only mint for the tier you are in, even if in the higher tier, so tier 1 can’t mint tier 2. Gas fees will need to be paid by the receiving wallet to mint the NFT but there will be no time limits for the minting as long as eligibility is met. This allows users to choose the best time to mint considering gas fees. Minting of NFTs is individual and not collective (we will explore the possibility for future collective minting).

There is no need to worry about missing a drop window, as long as you are staked before the end of each window you can come back and mint any time.

Important: to be eligible for staking/minting NFTs, the KOJI must be held in an ethereum wallet like MetaMask or Trustwallet rather than a CEX wallet like WhiteBIT.

Please note: The Tier values given here might change depending on the price of KOJI at a given time, the KOJI team will decide the new tiers but our intent is to change these amounts as little as possible. If new limits are set this will not affect those who already are staking in the pool with earlier set amounts.